International Coastal Clean-up Day (ICCD) is held during the third Saturday of September, and encourages people to rid their local beaches of the plastic tide that seems to be sweeping the world. On the 21st of September 2019, the Living Seas team and six volunteers embarked on an Extreme Beach Clean at Mew Island (Copeland Islands) to do our bit for our local seas.

However, as we pulled the van into the harbour at Donaghadee, the relentless beating of white horses against the pier told us that it was not meant to be. Health and safety was paramount as our boatman said that it would not be safe to sail in the weather conditions, but our volunteers came for a beach clean, so a beach clean we did.

A slightly less extreme beach clean along Donaghadee, the Commons and towards Milisle, and the beach at first glance looked quite clean. Once our team started to comb the beach, armed with litter pickers and safety gloves, we began to uncover the hidden depths of trash. We uncovered plastic bottles, tin cans, plastic bags, plastic straws and even a washed up buoy. Additionally, we even found a pair of USB headphones left in a rockpool, as well as a large metal pole, that was used in our trash photoshoot once we had finished collecting our rubbish.

Baby wipes, the main culprit of litter at the Commons was scattered throughout every section of the beach, but there was one area with an unnaturally high amount. These wipes may have been left behind at the beach, but as quite a few were entangled in the seaweed, the conclusion could be that they washed upon the shore from the sea itself, possibly flushed down the toilet! Just showing that some people don’t listen to the advice that only the three P’s can be flushed down the toilet, or just can’t be bothered to pick up their rubbish before they leave the beach.

As we sat down and enjoyed our lunch after the beach was cleaned, we looked out at the beautiful sea and witnessed a few local seabirds, such as oyster catchers and cormorants. We realised that the pollution on our beaches is still impacting upon the wonderful species we see living there, such as our beautiful seals and seabirds. And the efforts that our group went to, to clean up this stretch of coast, helped everyone to feel a bit better about what they did for nature. However, even though the activity itself brought joy and laughter among our troop, it would be even better if we no longer had to hold events like beach cleans and ICCD.

There is never just one cigarette butt on the ground, and never just one coffee cup found at the beach, so it is time we realised that leaving behind just one little piece of litter can damage the natural environment, and we all need to take responsibility for the waste that we create, especially when visiting a site with lots of local wildlife. And it might be a good idea to carry out a mini litter pick when you stumble upon a piece of litter, and just dispose of it in the correct way, even when it is not your own rubbish, especially when you are so close to the sea.

So how can we help our seas and stop creating so much waste? We could start by reducing the amount of plastic in our lives, for example bringing a reusable water bottle and reusable lunch container to school or work. We could also put pressure on businesses and industry to stop using single use plastic in their packaging by writing an email or letter to manufacturers or shops that sell plastic products. You could also write a letter expressing your concern to your local representative, when you find things that are of local concern during a beach clean. This will help to keep our seas healthier, the food we eat free from plastic particles and the air we breathe cleaner.

As there is still some funding remaining from our grant, we are hoping to reschedule our beach clean for the second week in October, so that these wonderful volunteers will have the chance to clean up Mew Island as well.

A huge thank you to Neighbourly, for their awarded community clean-up grant, without whom this event could not have taken place. Also, thank you to the Ards and North Down Borough Council for helping to dispose of our collected rubbish in Donaghadee. Many thanks to our wonderful volunteers who showed buckets of enthusiasm to clean up the beach, and put in a tremendous amount of effort to make a difference here in Donaghadee. If you want to make a difference to the marine litter around Donaghadee or the Copeland Islands, you can contact the Ards and North Down Borough Council to get your own clean-up pack, including litter pickers, vests, bags and gloves, and you can make a difference and begin to stop the oncoming plastic tide. 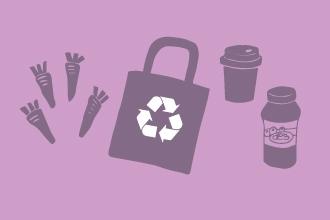 How to use less plastic

Plastic waste and its damaging effect on our natural world has been big news recently. Here's what you can you do about it. 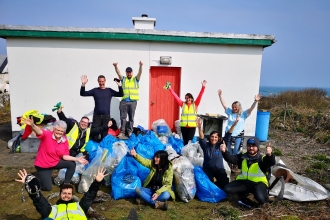 Join us for an extreme beach clean on Mew island, to remove any remaining litter. 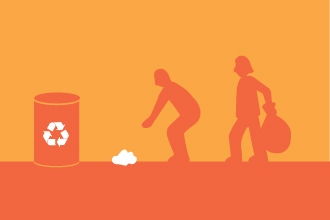 Be a wildlife saviour and pick up litter!

Here is our shout out to the COAST Office in Portballintrae, to tell them how FINTASTIC they have been in their work with Ulster…

On 18th April 2019, the Living Seas team and 9 enthusiastic volunteers made the crossing to the Copeland Islands for a very extreme…

Beach Clean on the Copelands

On Friday 27 April volunteers from Ulster Wildlife, the Copeland Bird Observatory and Beach Cleaners Ards and North Down boarded a boat…