Meet Andy, Nature Reserves Manager for Ulster Wildlife but also the Moth Recorder for Northern Ireland. Moths are Andy's passion and every week we showcase one of his marvellous finds on social media for #MothMonday. So let's meet the man behind the moths and find out how it all started and why recording moths is so important.

What got you interested in moths in the first place and when did you first start moth recording?

I first got interested in moths about 20 years ago, when I was in my mid-teens. I found a large yellow underwing (a reasonably common moth as it turns out) in my bedroom but had no idea what it was so I walked all the way from my house to Newcastle Library and found a book on moths. Happy in my identification, I went back home and let the moth fly out, only to be swiftly traumatised when a song thrush popped out of the hedge and caught it in mid-air. A valuable lesson was learned early on!

I got into moth-trapping when I was working as a seasonal warden at Murlough NNR. I was asked one night, as I lived nearby, would I let the moth man into the nature reserve.  His name was Kenny Murphy and from the moment he turned the trap on and the moths started to come I was hooked. I was amazed at how he could even identify some of the moth species as they were flying around our heads before they flew into the trap! I still chat to Kenny regularly, he's a good friend, for advice on moths or just for a good old chat.

What's your most memorable moth encounter?

My most memorable encounter with a moth was when my dad was tending to his bees - I was still a teenager. He came into the house talking about an enormous moth he had found. I asked him where and walked out with a jar 'You're going to need a bigger jar!', he said.

So, properly armed with a large jam jar, I went to hunt for the moth where he said - there it was and it was truly enormous. I hadn't a clue what it was and I'd never even seen an insect as big as this in real life. As I cautiously approached it, with jar and lid in hand, it hissed at me! and I ran away! That last bit isn't strictly true but it really did scare the life out of me.

The moth in question was a convolvulus hawk-moth, one of the biggest species that occurs in Northern Ireland (it's actually a rare immigrant from southern Europe).  It wasn't until years later that I found out that the hissing sound was made by the moth rubbing its legs together as a defence mechanism to scare potential predators off - it worked!

How many moths have you seen so far in Northern Ireland and what's on your wish list?

I've seen 383 of the 579 Irish macro moths, so lots for me still to see. Macro moths I'd really love to see in Northern Ireland include: chimney sweeper, plain wave, argent & sable, grey mountain carpet, bordered pug and bilberry pug, to name but a few.

I've seen over half of all the moth species ever recorded in Ireland.

I've seen around 350 micro moths out of c.850 in Ireland, so I've seen over half of all the moth species ever recorded in Ireland. Best moth I've ever recorded is Stephens' Gem, an American species practically brought to my doorstep courtesy of Hurricane Sandy in November 2012 - the only Irish record and perhaps the 8th record on this side of the Atlantic. This year I've found Ephestia woodiella, dusky thorn, Homeosoma sinuella, and Devon carpet, all new to Northern Ireland.

People often say moths only come out in spring and summer, so why do you keep on going all year round?

It's true that there aren't many moths around in winter, but how do we know about them unless we look for them? And if we don't know about them, how do we conserve them? That's my high-brow rationale to justify to people (not least my wife) as to why I don't and can't stop. I'm just a moth obsessive who gets a massive kick when something like this turns up in the trap a couple of years ago...in December! This is Spolodea recurvalis, an immigrant species from the Tropics that turned up in December?! That's why I have to check the moth trap every day. or at least do something 'mothy' every day of my life - the potential rewards are just too great to miss out on; it actually keeps me awake at night!

What is involved in your role as Moth Recorder for Northern Ireland?

I'm the Moth Recorder for NI, which means that I'm interested not just in the moths and what they look like, but also their conservation.

I do a lot for moths (recording, providing information, running training sessions, standing up for moths) so why then am I one of the only people who has a house full of case-bearing clothes moths?! They even chew holes in my carpet - proof that karma isn't a real thing!

What are the best Ulster Wildlife nature reserves for moths?

My job as Nature Reserves Manager allows me to work on some of the best sites for moths in Northern Ireland. Nature reserves like the Umbra have really rare species such as small eggar and scarce crimson & gold, moths that we talk about a lot, but I also really like species such pretty pinion.

Slievenacloy is known as one of the best grassland sites in the east of Northern Ireland and this is reflected in the moths found there: this is a place where you can see day-flying moths such as narrow-bordered bee hawk-moth and latticed heath, but also much rarer creatures like marsh pug and red carpet.

Every now and then I record a moth which is a little bit special - maybe for its rarity or even perhaps new to Northern Ireland - this was the case earlier this year when I recorded Devon carpet moth at Glenarm nature reserve.

Don't forget, you can join Andy every #MothMonday over on our social media channels to find out more about our marvellous moths.

Also, remember to log your moth sightings with Andy using our dedicated form. 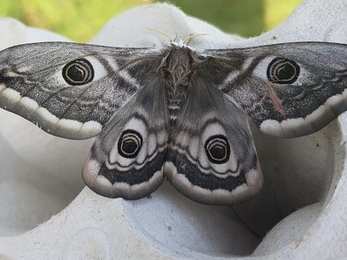 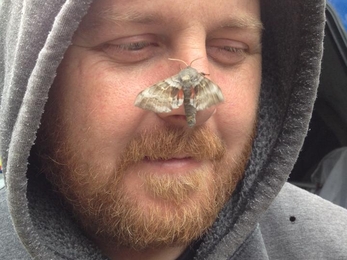 Andy with moth on his face 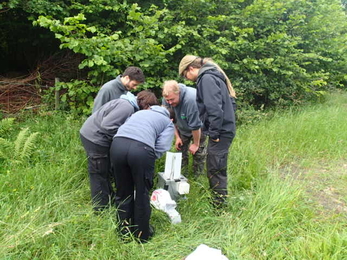